The search for economically meaningful natural resources like for example hydrocarbon, coal, lignite, potash and rock salt and their mining are subjected to the regulations of the Federal Mining Law in Germany. A differentiation is made between "freely mineable” resources and "freehold” resources. Freehold resources are the possession of the landowner, whereas freely mineable resources however do not form part of a freehold.

Applications for granting mining authorizations have to be made in writing. The respective Ministries of the States have enacted comparable directives. The spatial jurisdiction of the LBEG extends to the States of Lower Saxony, Hamburg, Bremen and Schleswig-Holstein as well as the German continental shelf of the North Sea and a part of the German continental shelf of the Baltic Sea.

In addition to the current exploration licences, production licences, and mining proprietorship the authorization forms taken on from the old law are also valid and regarded as old rights.

An overview of the mining licences granted (spatial extent, holder, allocation time periods etc.) can be found on our NIBIS® MAPSERVER. For use in GIS the ESRI-Shapes are available for download. 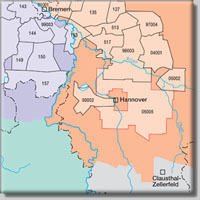